This is one of the things that went right for me this week. You cant go wrong with something that is
so simple to make but produces amazing results. Those drooling commercials of Red Ribbon and
Goldilocks from TFC ( The Filipino Channel) inspired me to bake this cake to satisfy my
my cravings. The heart of this recipe is whisking of the egg whites. The stiff peaks of egg whites
is responsible for the airy,soft and light texture of the cake and the light brush of melted butter on
top makes them heavenly.

You probably want one right?

Chiffon Cupcakes ( Filipino Mamon)
makes 6-9 muffins sized cakes
Ingredients:
Directions:
*Preheat oven to 350 F. Grease 9 muffin pans with cooking spray.
*Mix together flour ,baking powder and salt in a bowl.Set aside.
*In a mixing bowl.Whisk egg whites using electric mixer on high speed.until foamy.
Add in   cream of  tartar and whisk until stiff  peaks formed.
*In another bowl, beat egg yolks with the sugar until mixture is thick and fluffy and has a
nice   lemon color.
* Add in the oil, followed by the butter and continue to mix until incorporated.
* Add in the flour mixture in three portions and mix just until the flour blends, Dont overmix.
( approximately 7 -8 seconds per addition of flour)
* Add a spoon or two of the whisked egg whites into the yolk mixture and mix to slightly reduce
the thickness of yolk mixture, Then add in remaining egg whites in 4 portions and blend to produce
a light, airy batter.
* Fill muffins molds to 3/4 full and bake for 18-20 minutes or until a toothpick inserted in the center
of cakes come out clean. This cake cooks fast so watch slowly ( but don’t open oven door like an
anxious kid).
*Brush top with melted butter and sprinkle sugar .
*Store left over in air tight container. 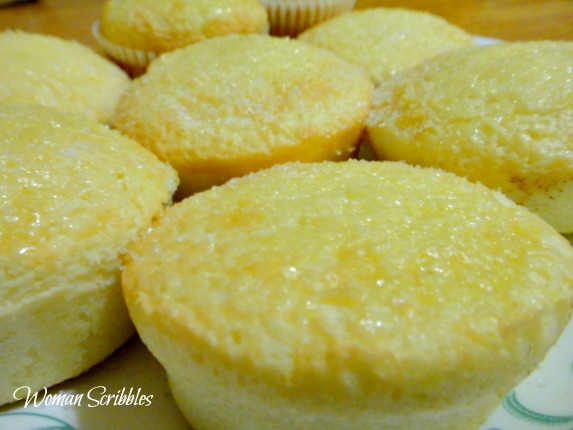