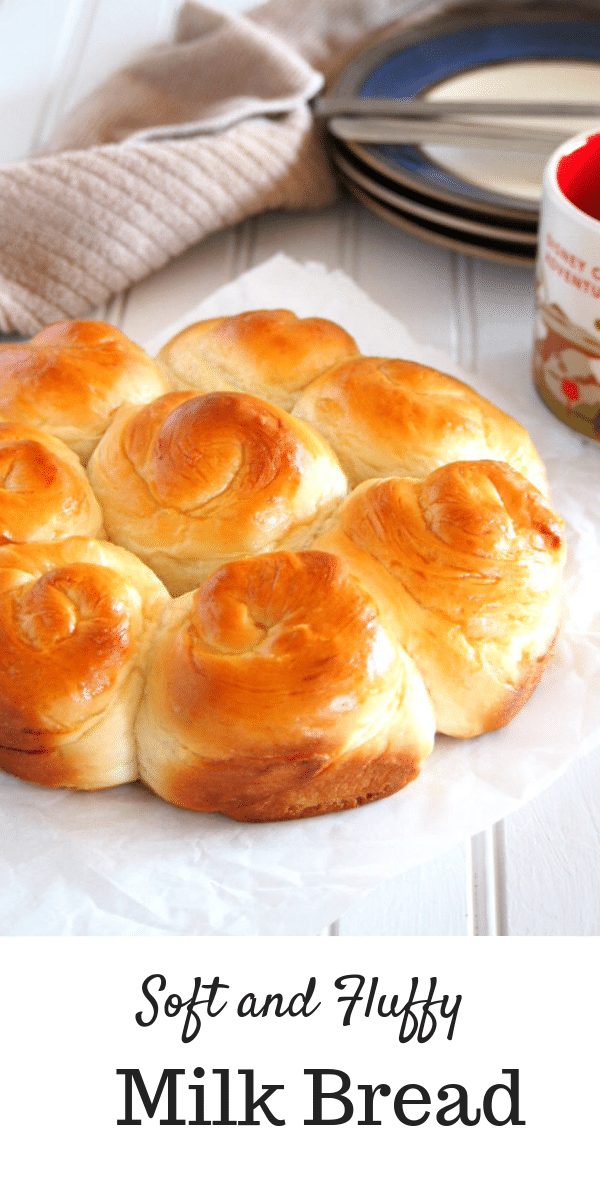 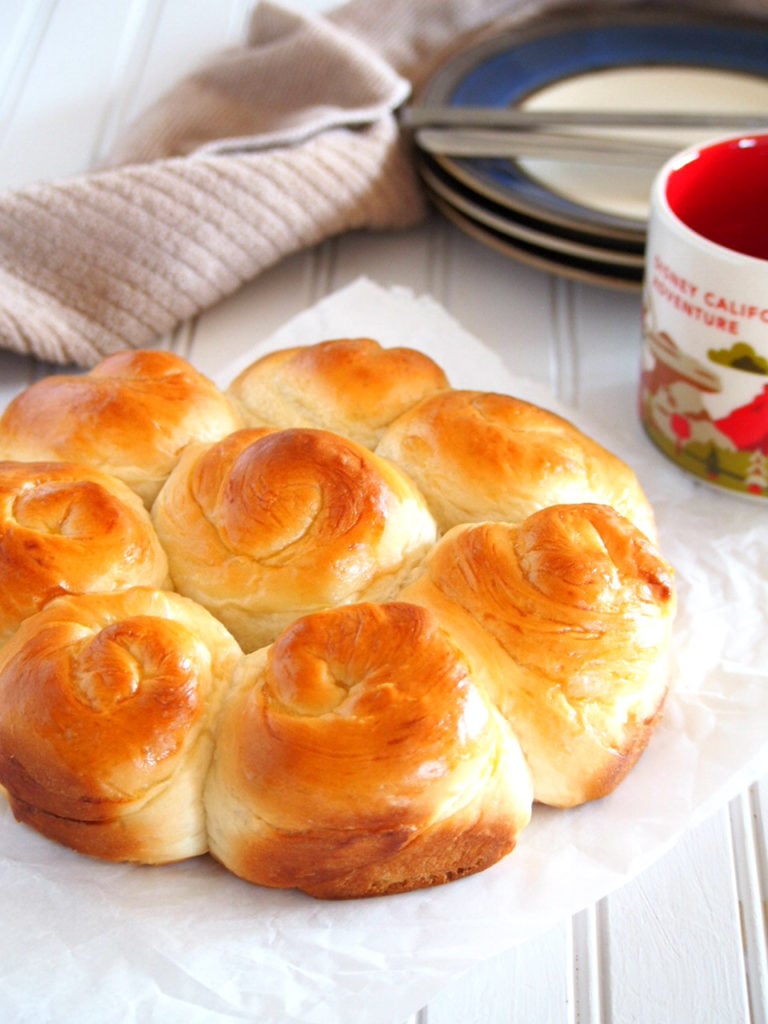 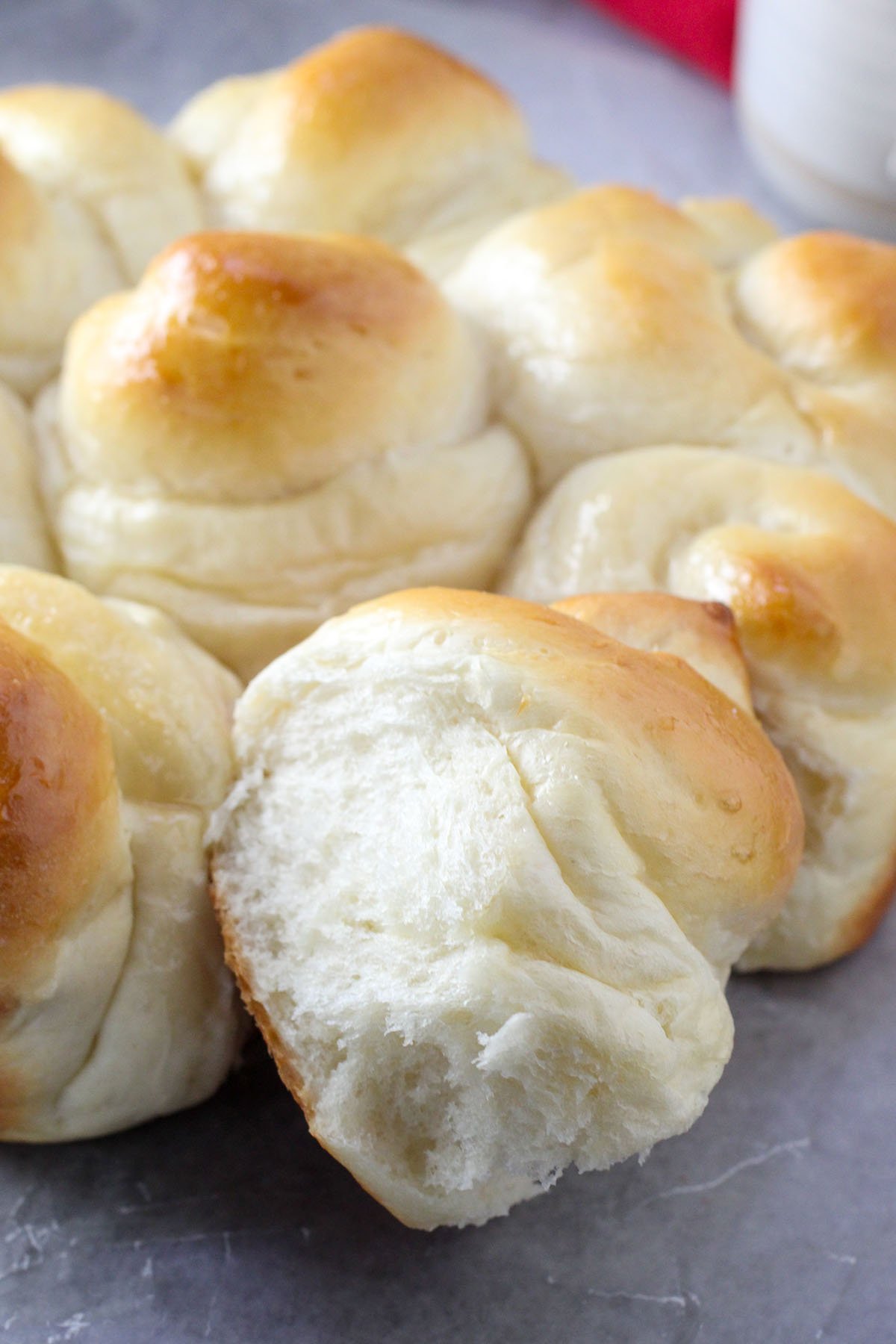 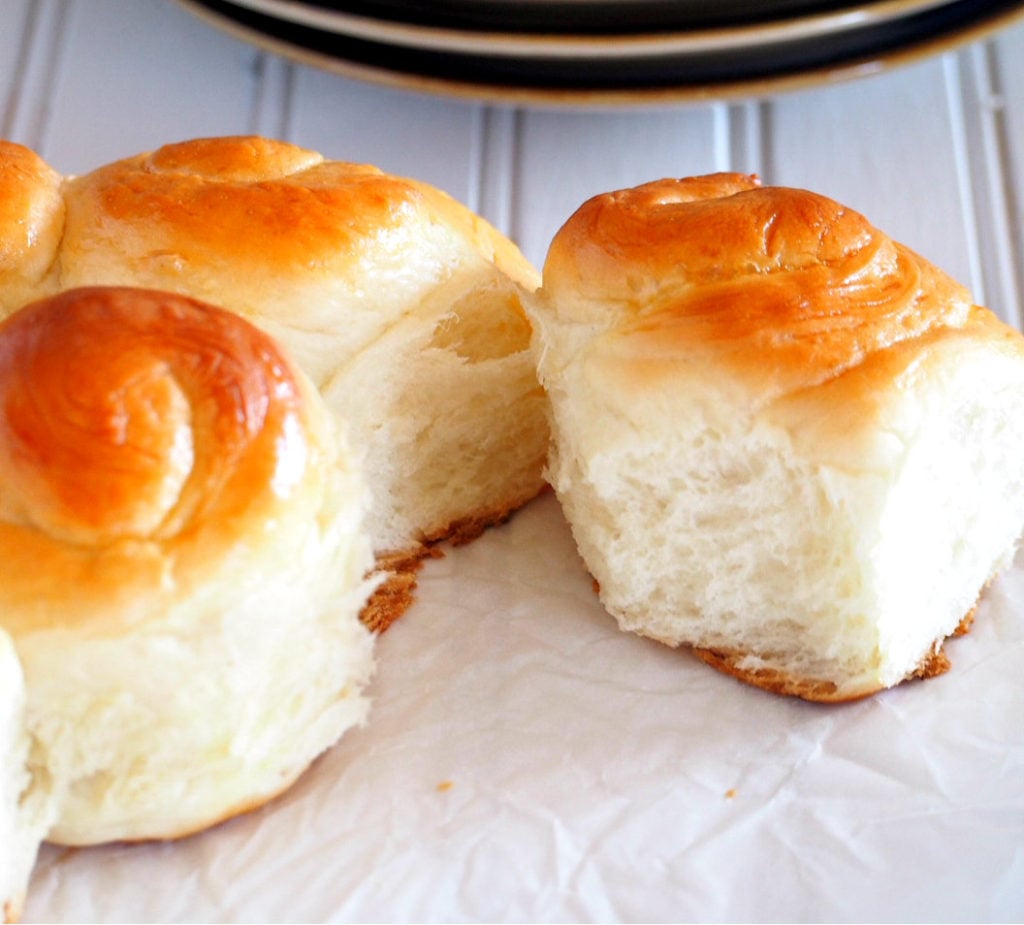 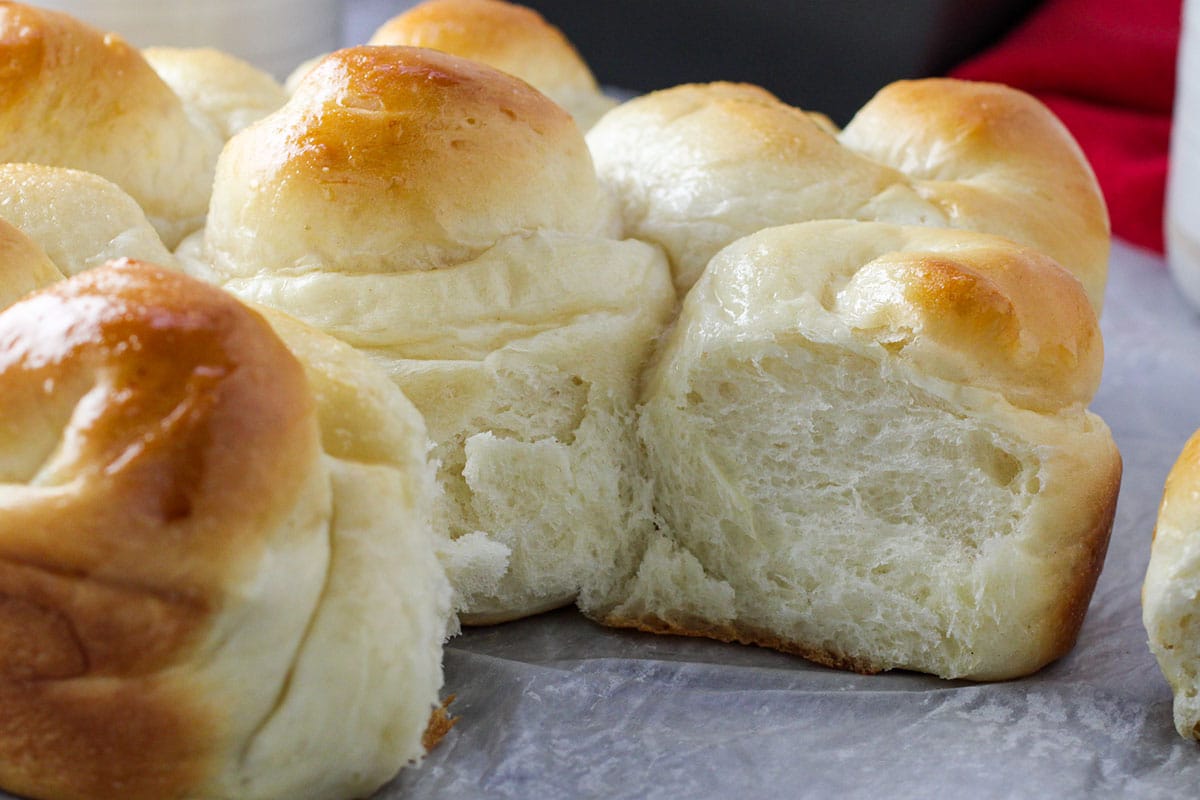 In the bowl of a stand mixer, add the warm water. Sprinkle the yeast and about 1 tsp of the sugar. Let stand until foamy.

Add the warm milk, warm heavy cream, the egg, the remaining sugar and salt. With the dough hook attached, run the mixer at low speed just to incorporate the ingredients.

With the mixer still running, add 3 cups of flour, one cup at a time, and beat until the dough gathers into a shaggy mass. Add the remaining cup of flour and continue to beat until incorporated.

Then slowly build up the speed to medium and mix the dough for about 8-12 minutes, scraping the sides and bottom of the bowl when necessary. 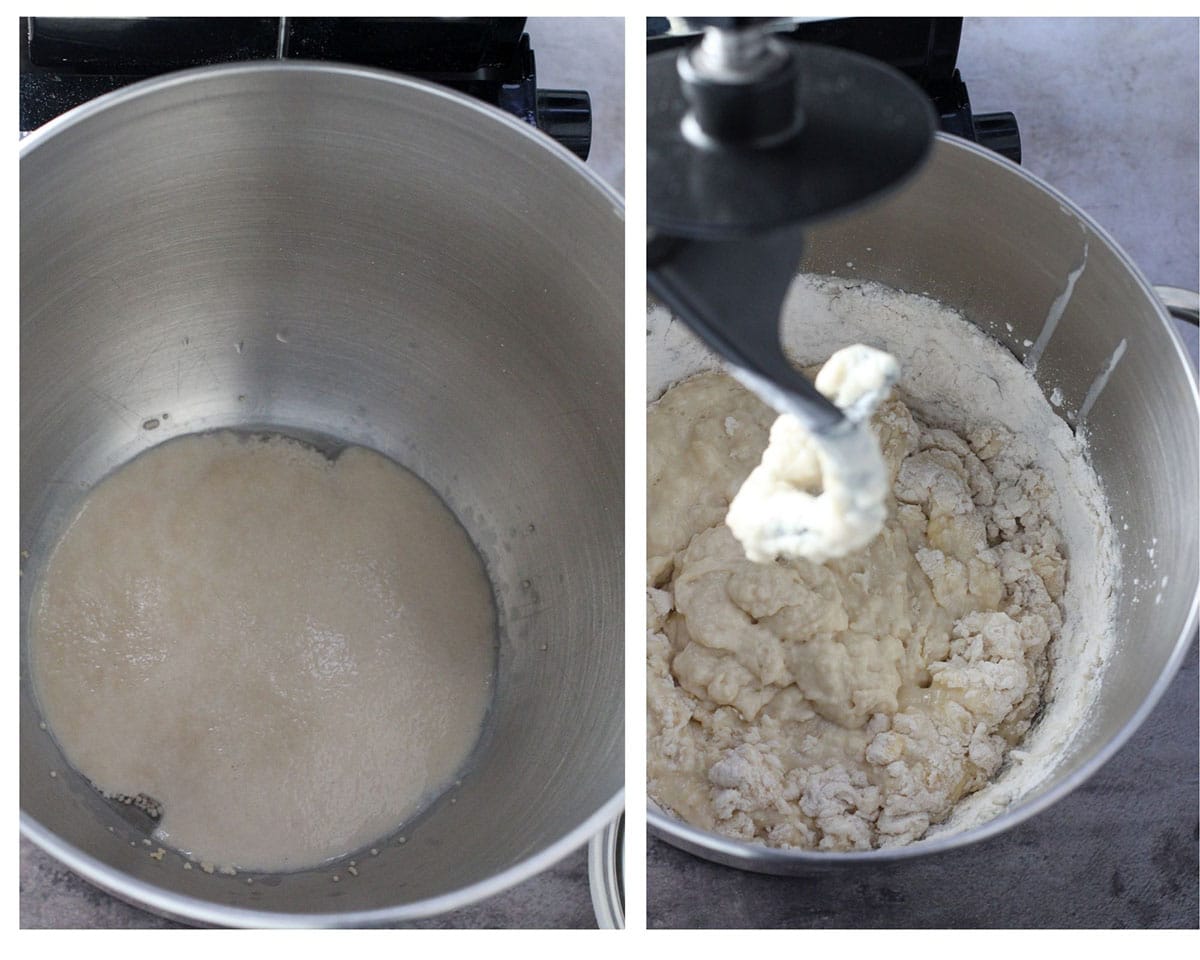 Proving the yeast (left) and mixing the dough (right).

As the machine continues to run, you should see your dough starting to form in the center, and is clinging to the dough hook. A few minutes more and the dough is beginning to slap the sides of the bowl and making the slapping sound.

If you are 10 minutes into the mixing and the dough seems like it is not coming together (still laying flat and shaggy in the bowl), sprinkle about a teaspoon or two of flour to the bowl. You can add up to 2-3 tablespoons of flour.

Keep mixing until the dough is coming together in the center. You should hear the slapping sounds of the dough soon. 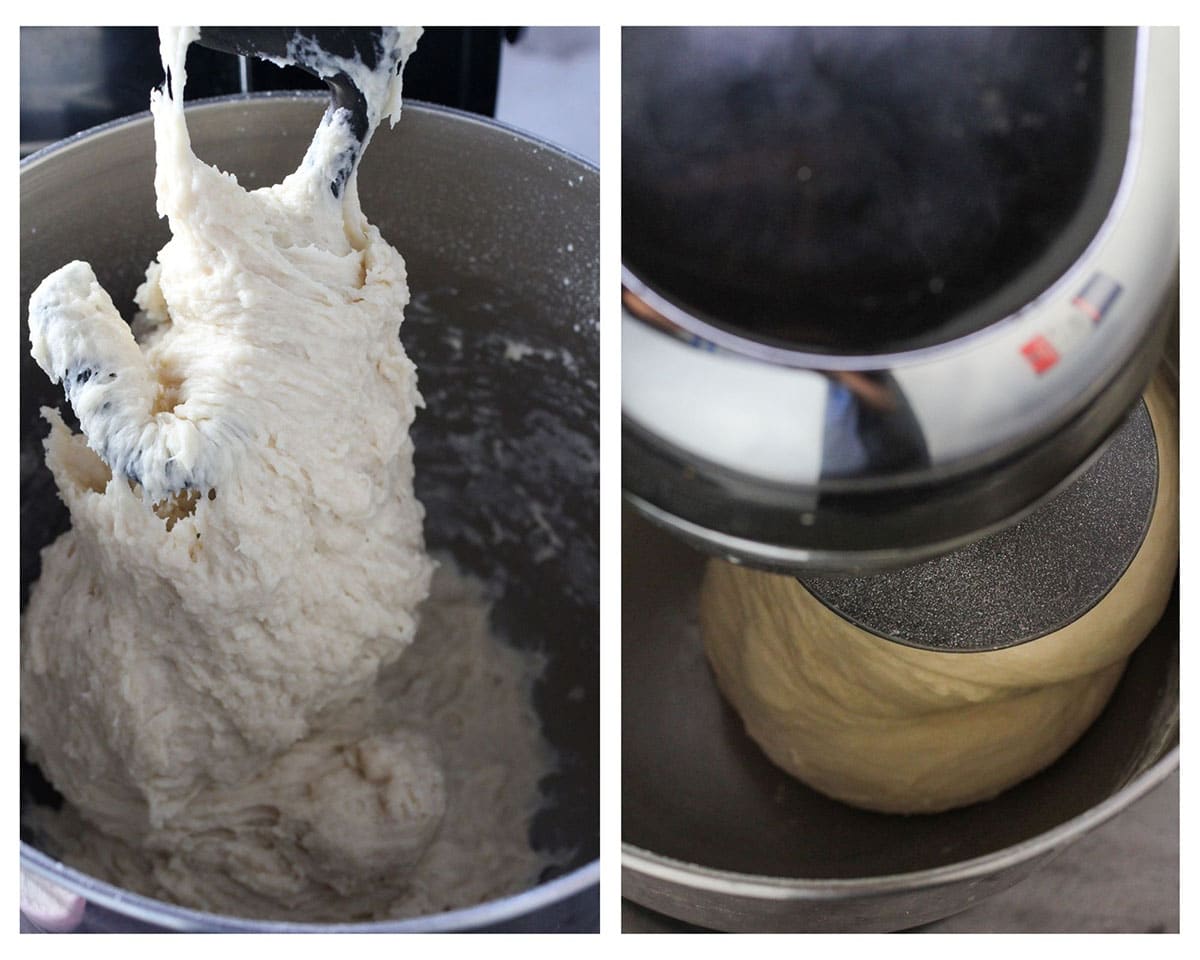 Stages of kneading the dough.

Overall, the kneading should take like 8-12  minutes only. Longer than that, you might risk over kneading your dough. The dough is now ready for proofing.

Its texture is still a little bit tacky when you poke it with your finger, but it has lost a lot of stickiness at this time. 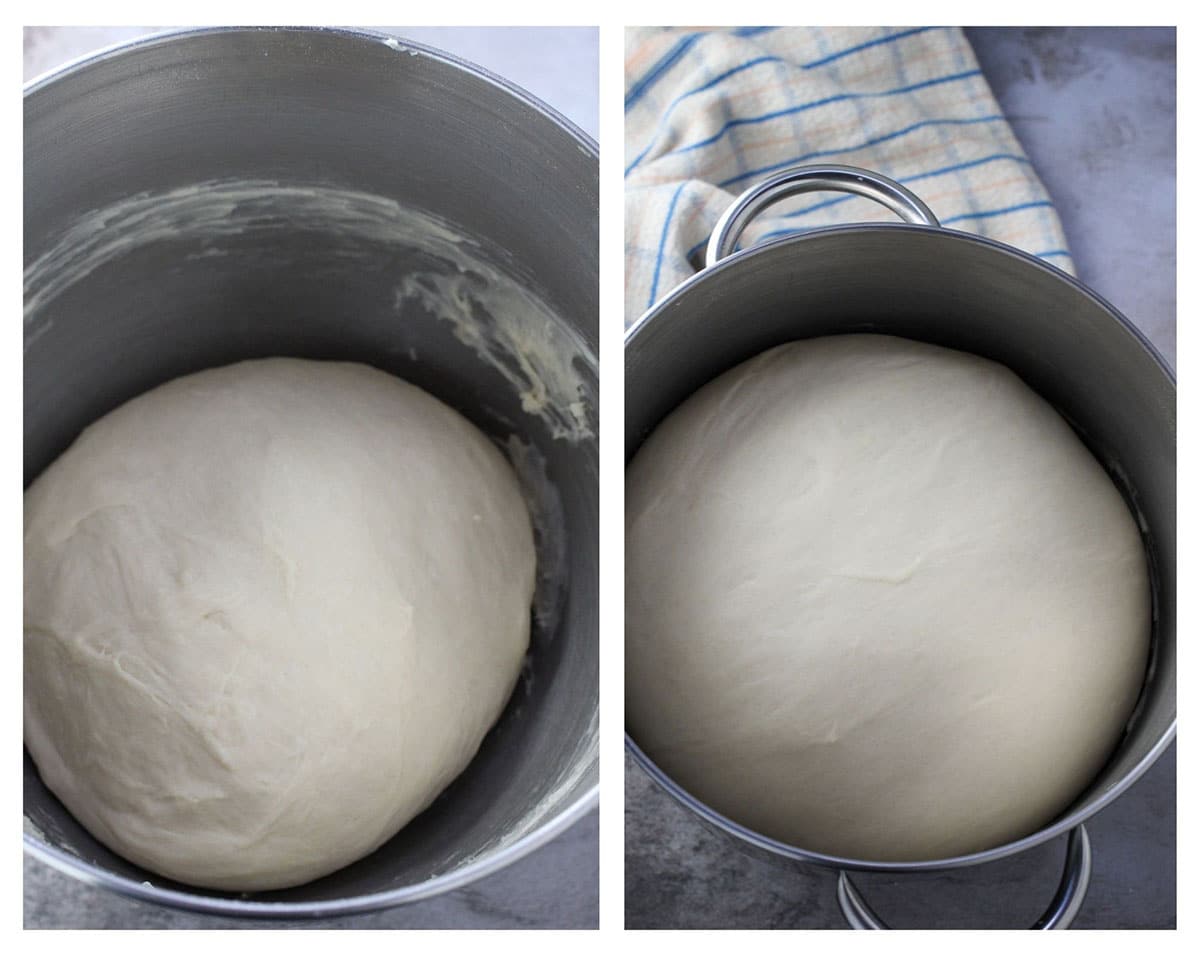 The kneaded dough (before and after the first rise).

Gather the dough into a ball. Sprinkle a little amount of flour into the sides and base of the bowl and place the dough for proofing. (Or set the ball of dough in another bowl, if you prefer.)

Cover the bowl with a kitchen towel and set this aside in a warm place for about 1 to 1 and 1/2 hours. The dough should double in size. After the first rise, divide the dough into two equal portions.

Let this assembled dough rise for an hour. Cover them loosely with plastic wrap and set them aside. Once the dough has risen, preheat the oven to 350 F. Make the egg wash by beating one egg with 1 tablespoon of milk. Brush the surface of the rolls with the egg wash. 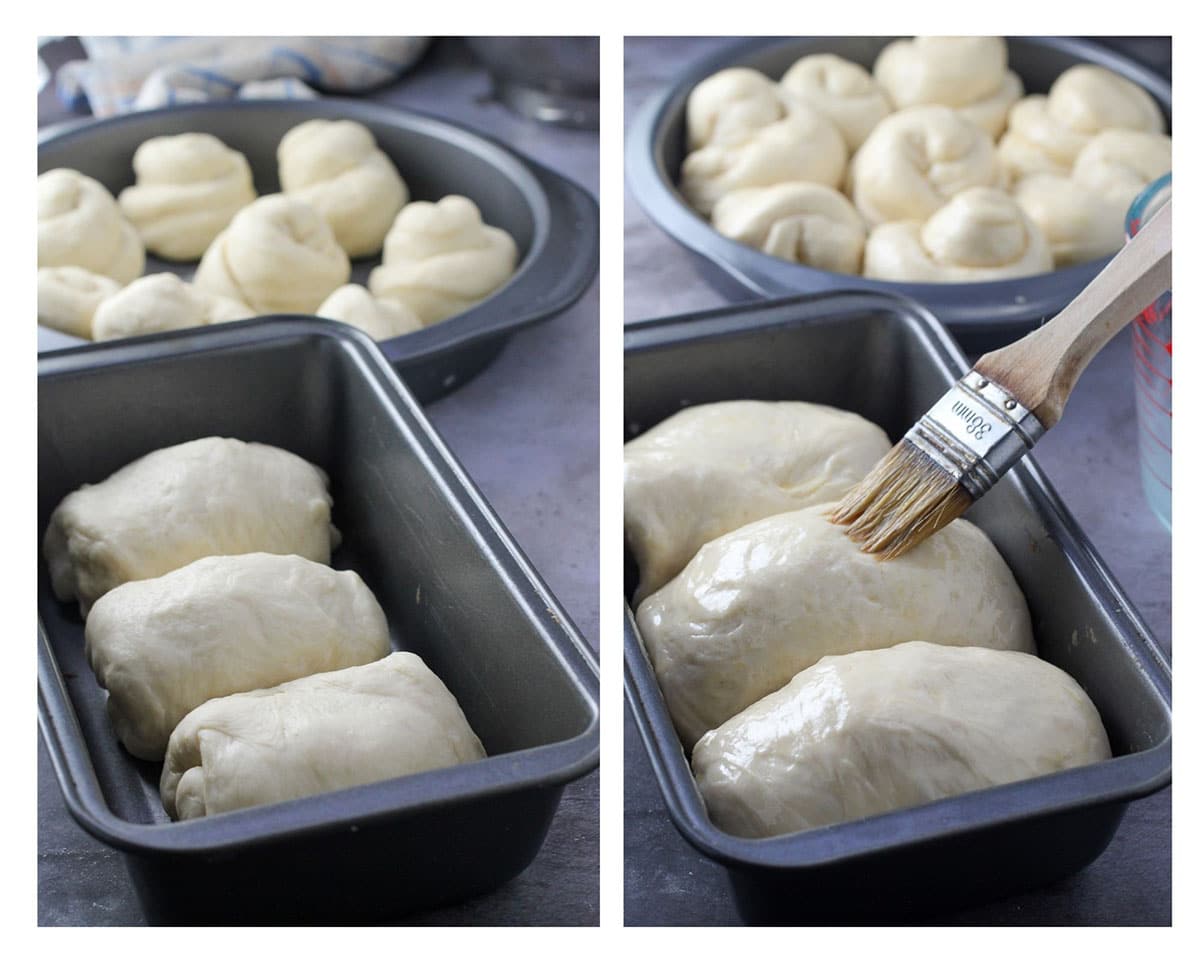 Bake the rolls for 23-25 minutes. The top should be deeply golden and a thermometer should read 200 F. Do not over bake them for they will dry out fast.

Then, enjoy the fruit of your not-so-hard labor. Your bread is now ready for glazing, for slathering with spread, or simply pick one out right there and feel the fluffiness of each bite. 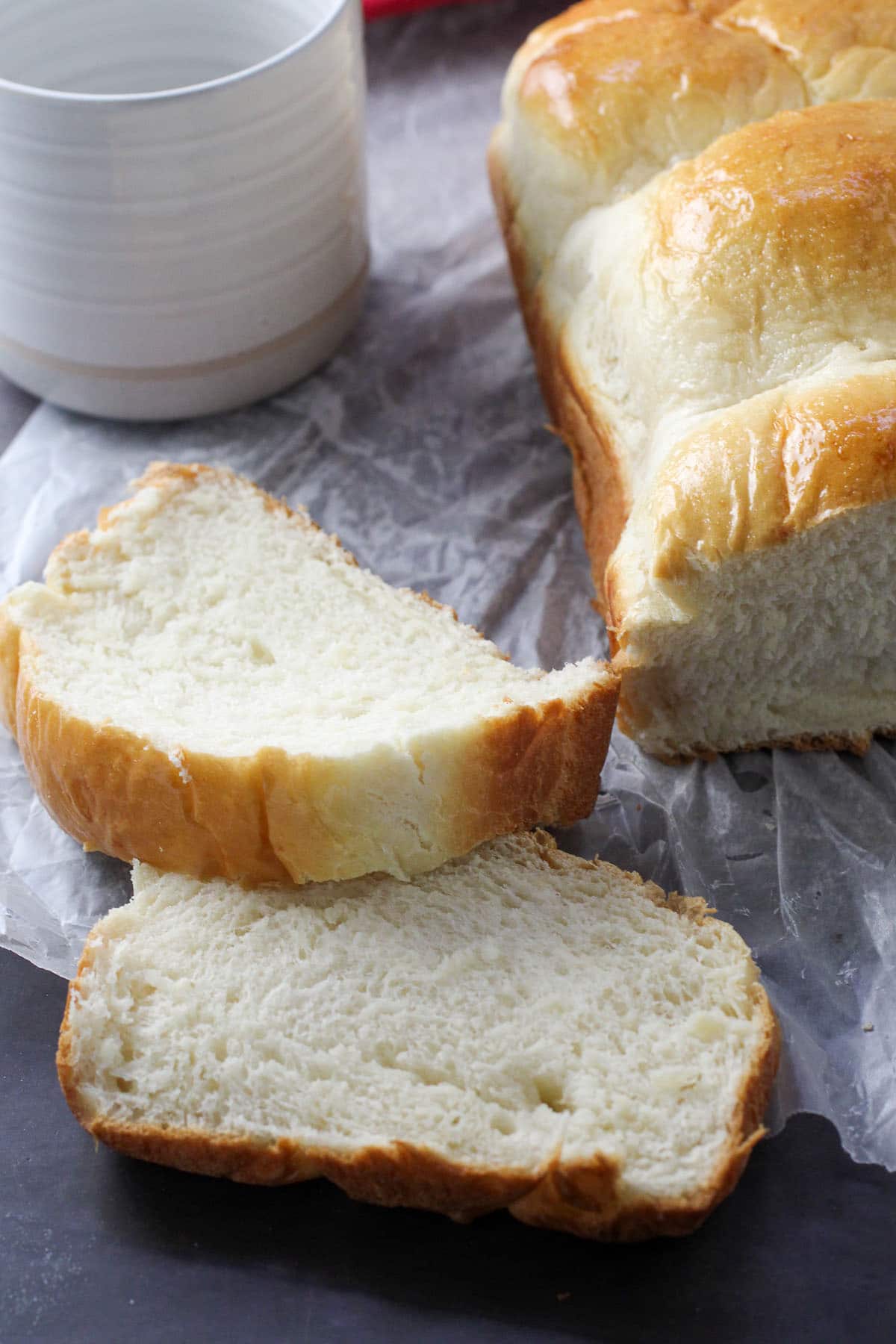 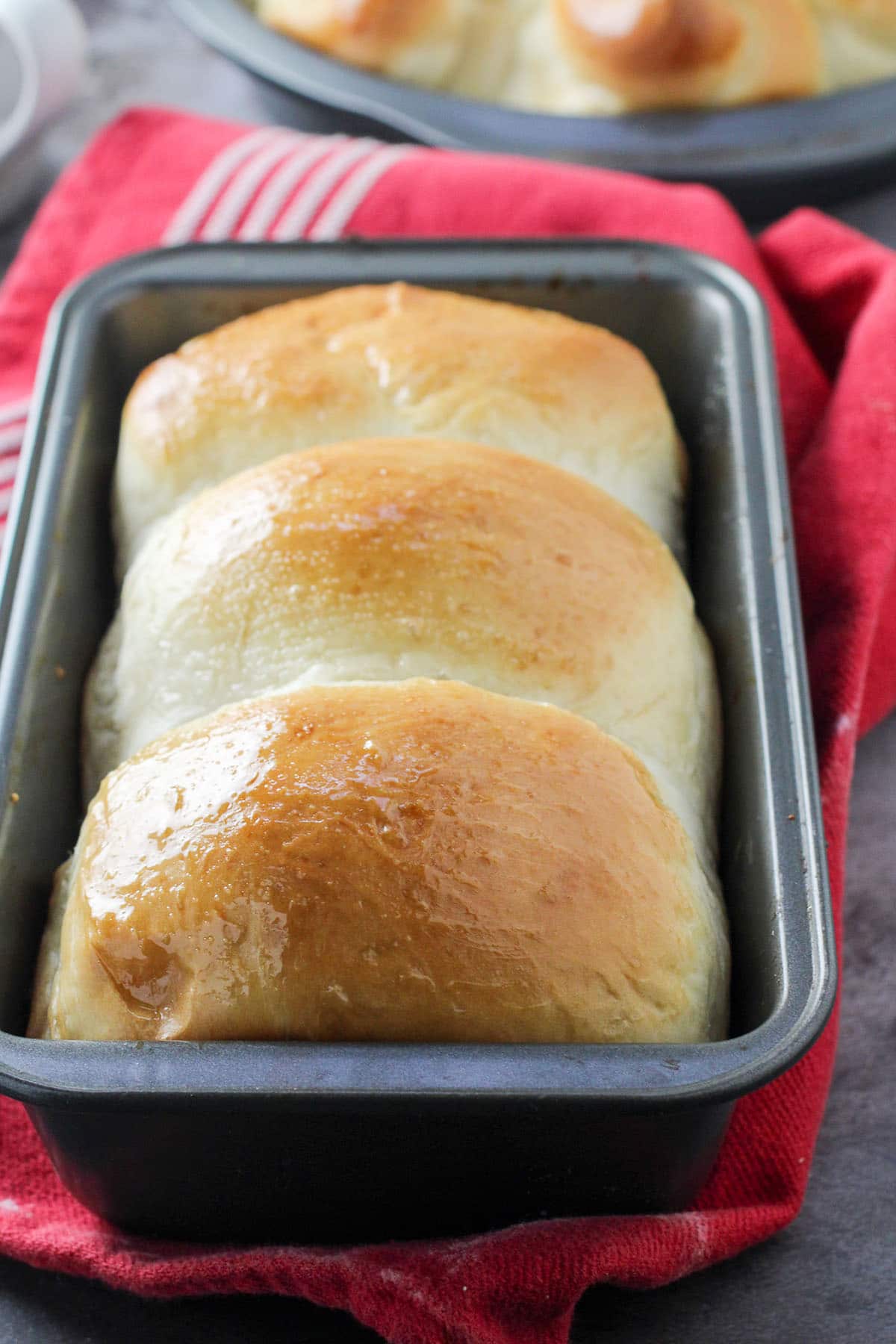 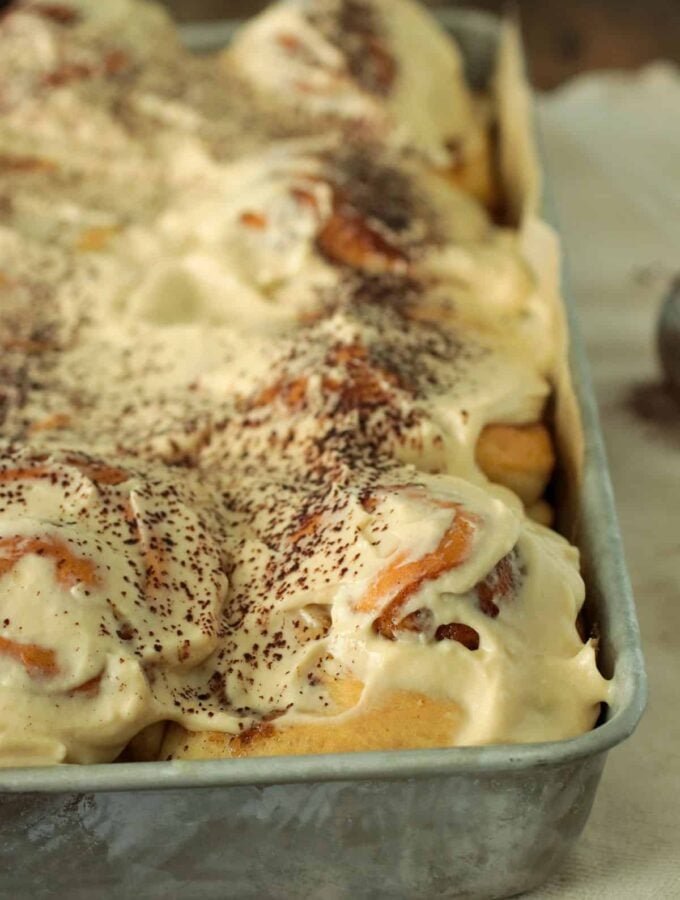 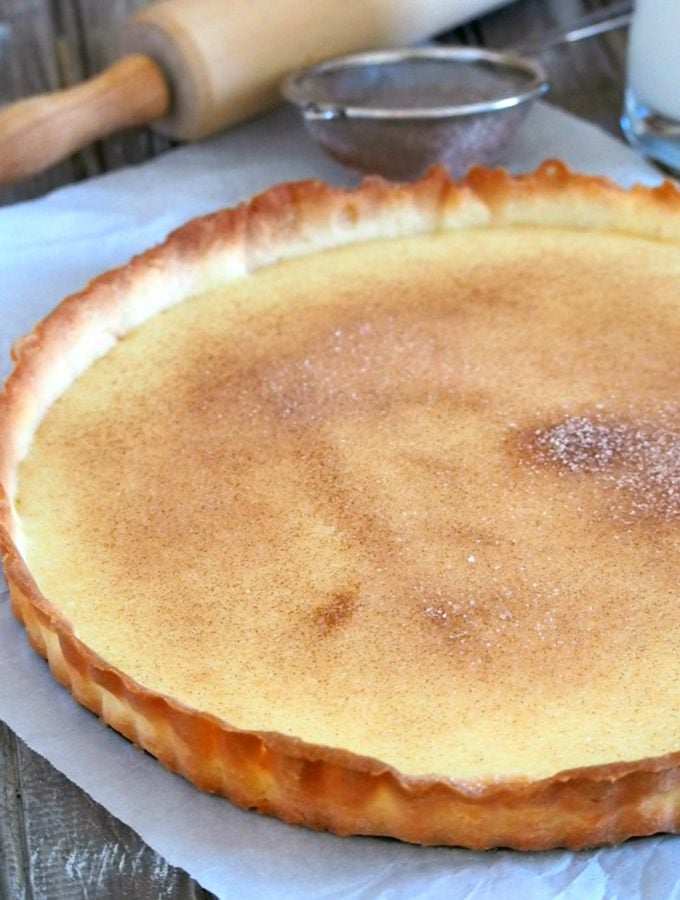 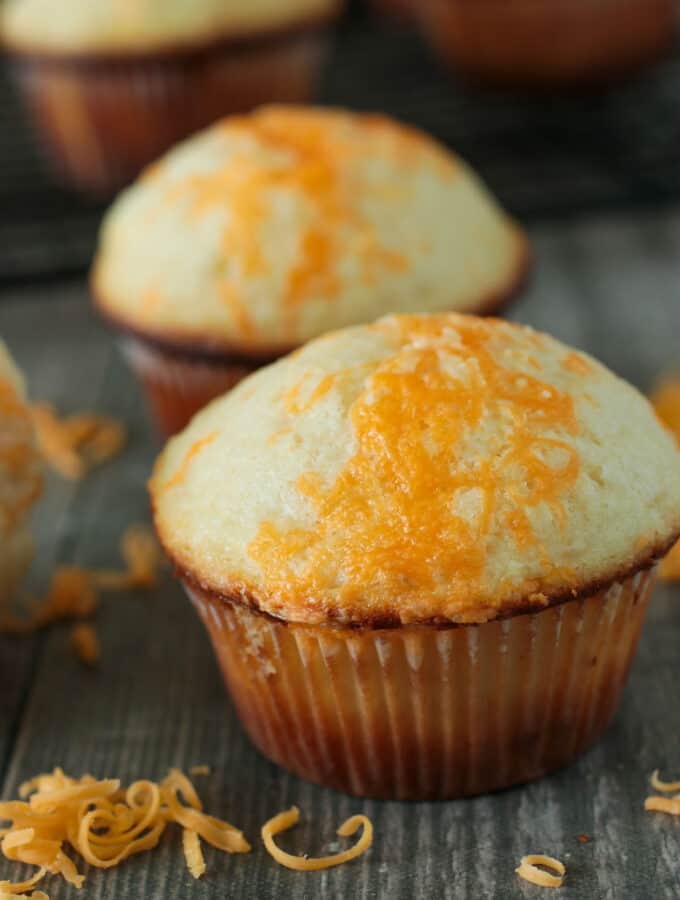 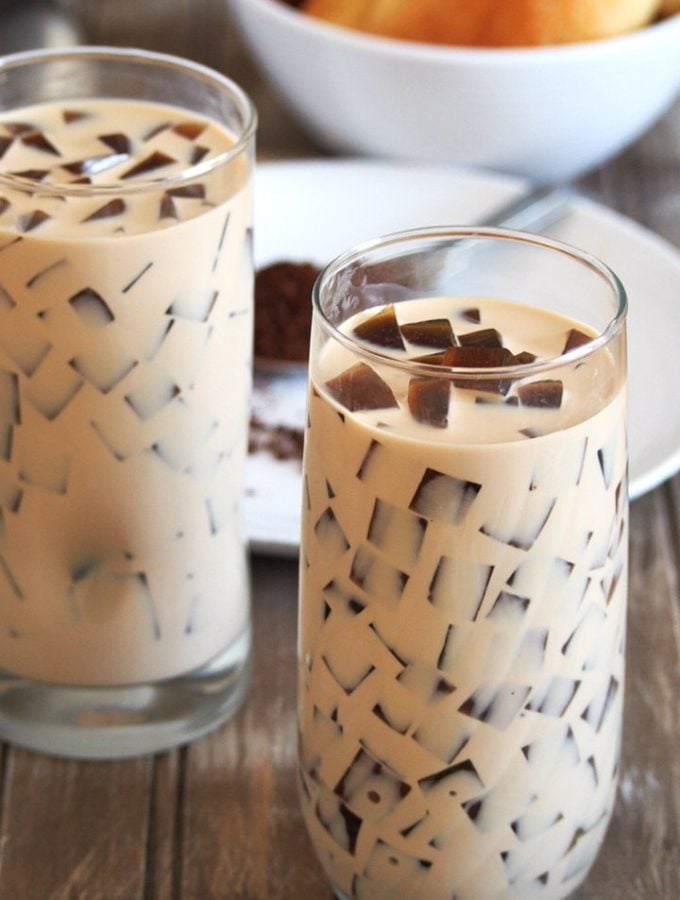 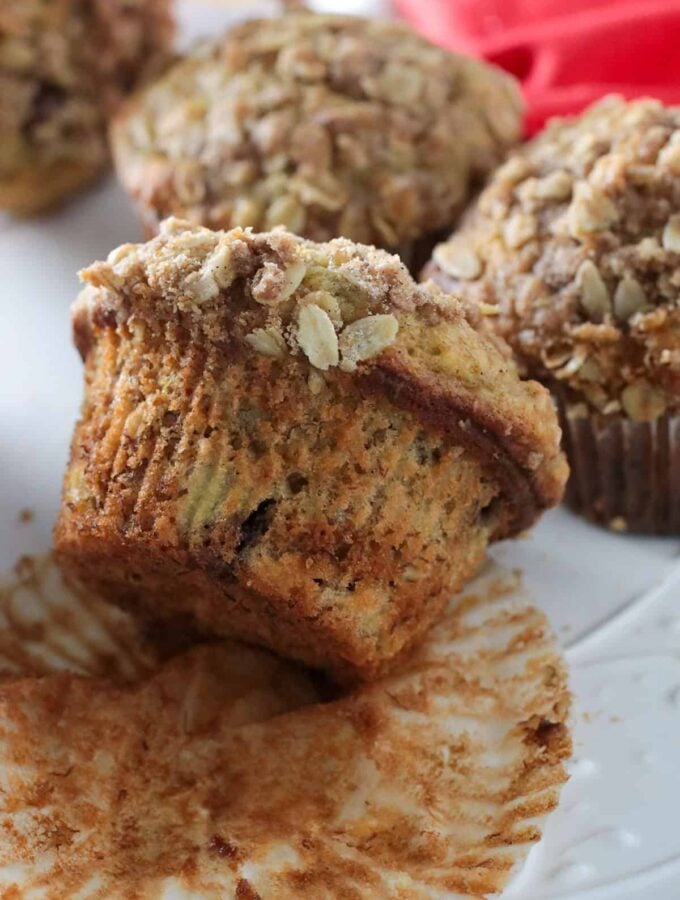