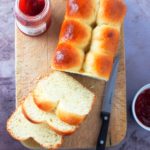 This brioche Nanterre can be well enjoyed on its own because of its buttery and rich flavor. Just add a cup of coffee for a complete indulgence!

Let the Dough Rise and Chill