Milk Tart is a simple but delicious dessert that hits just the right spot of sweetness and richness with it’s milk custard filling. It is nestled on a sweet, crisp and buttery pie crust that you cannot resist. 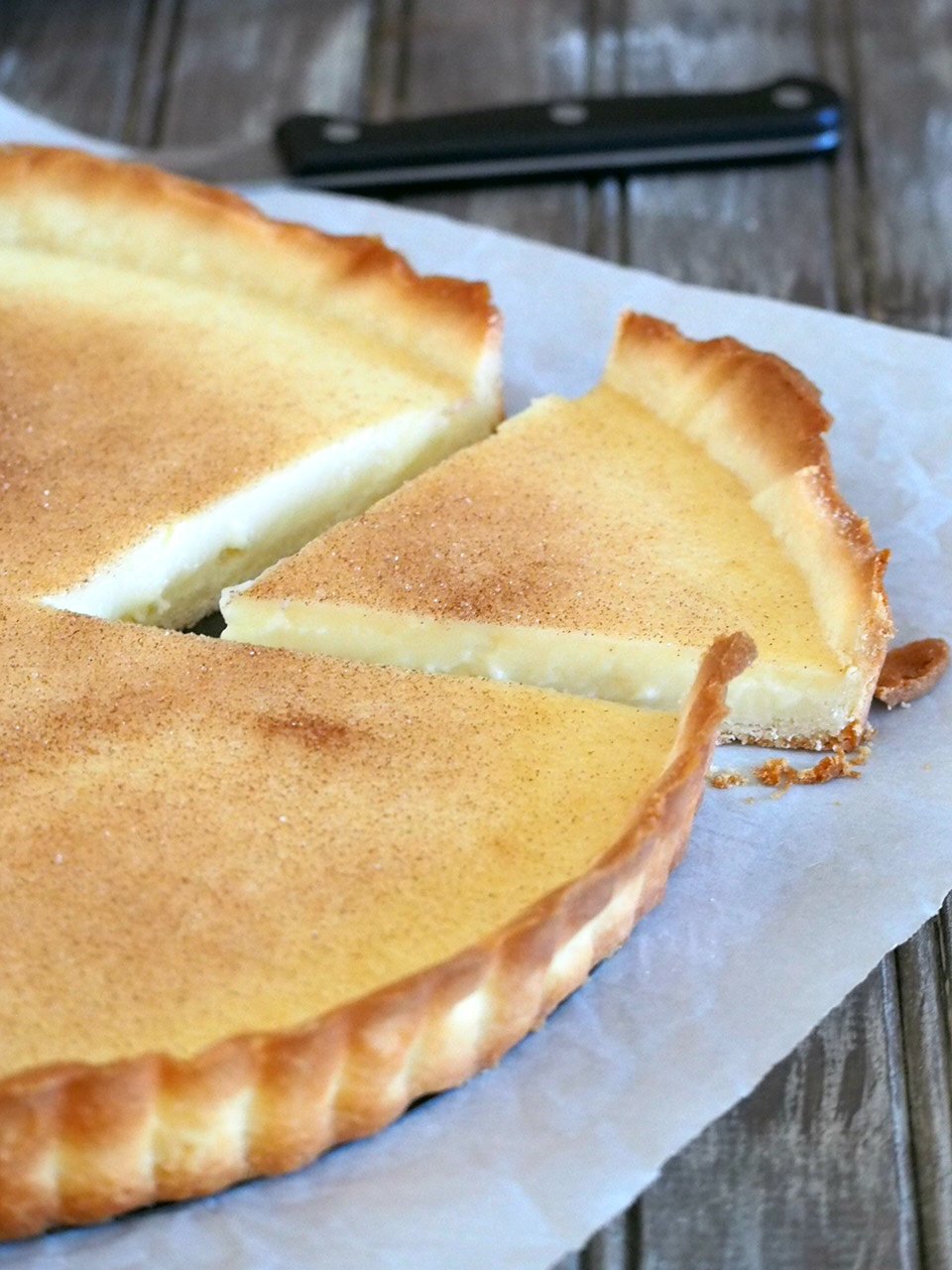 Such a simple and homey dessert, Milk Tart is made of a creamy milk mixture that is almost like a pudding. It is deliciously nestled on a sweet, buttery tart crust.

It is a dessert originating from South Africa, and is locally known as melktert . It is characterized by a simple milk custard on a sweet crust that does not have the typical flaky and light texture. Instead, the tart crust is more like a cookie type of pastry. 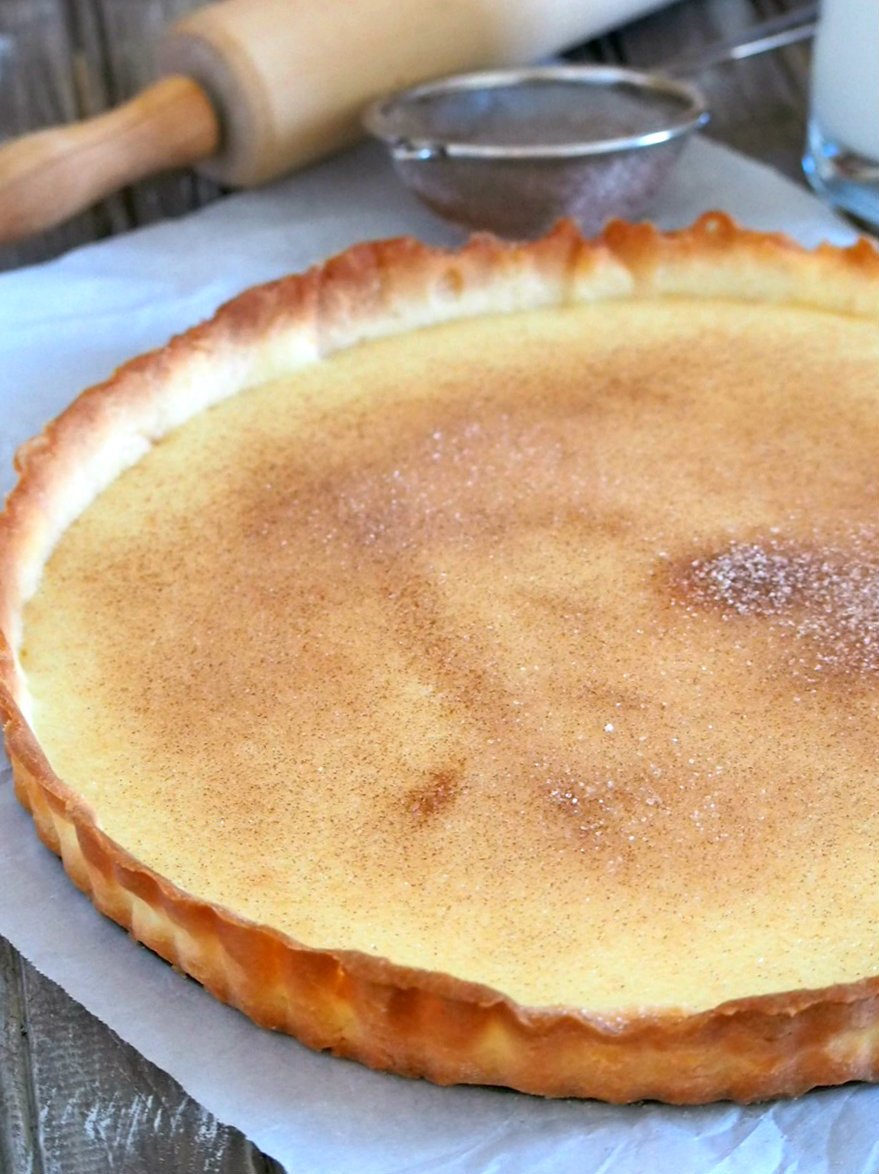 Again, mine is part traditional, part improvisation. I added cream to the filling to give it a richer texture. Paired with the tender-crisp tart crust, this is a delight.

You might think that a milk tart is almost like an egg pie or an egg tart. And it is. Almost. But they differ on some points.

How to Make Milk Tart?

In the bowl of your stand mixer, cream butter and sugar until it is light and fluffy.

To this creamy state, add the egg yolks and half of the water and continue to mix for a minute or two just until the ingredients are incorporated.  Add 2 cups of flour gradually and then add the remaining water.

Mix briefly until the dough is almost coming together. Turn it out on a floured surface and knead briefly just to form the dough together. Shape it into a disc and wrap it in plastic. Chill in the fridge for 2 hours to overnight.

Let the dough rest for half an hour after taking it out of the fridge. Use your rolling pin to flatten it slightly, then roll it until it is 1/2 to 1/8 inch thick.

Place an 11-inch tart pan over the rolled dough.  Using a knife, trace a circle around the pan that is 3/4 inch bigger. Cut the circle and position the tart pan on a baking sheet.

Gently lift the cut circular dough by wrapping it in a rolling pin. Center it on the tart pan. Fit the dough onto the edges of the pan by molding them in with your fingers.

Cut the excess dough hanging on the sides of the pan by using scissors. Refrigerate the assembled tart crust for at least 1 hour to overnight.

Next up is blind baking:

So after chilling the dough, pre-heat oven to 350 F. Line the tart crust with parchment paper, covering the surface and edges. Place uncooked rice or beans over the hollow of the shell making sure to fill it up to the sides.

Bake in the pre-heated oven for 30-35 minutes. The edges should be golden and the base should be lightly browned.

In a small bowl, whisk together flour, cornstarch, eggs, and 1/8 cup of sugar until smooth. In a medium saucepan, stir together milk, cream, and 1/4 cup of sugar.

Add the cinnamon stick. Over medium heat, allow the milk mixture to come to almost boiling.

Turn off the heat and in a slow, steady drizzle, pour about 1/4 cup of the heated mixture into the egg mixture, stirring the eggs constantly as you pour. Once the mixture is smooth, pour back everything into the pan and turn on the heat again.

Cook the filling, stirring constantly until the mixture has thickened like a curd but is still flowy. Pour the mixture onto the baked tart shell. Spread across the entire crust and allow to cool to room temperature.

Chill in the fridge uncovered for at least  4 hours to overnight.  Sprinkle cinnamon and sugar on top of the filling and serve.

Milk tart is a delightful dessert. A beautiful pastry that is not too rich or sweet but will definitely satisfy your sweet cravings.

If you want richer egg custard on a pastry, you are covered with two recipes here on the blog, my simple egg pie recipe and my Filipino Egg Pie as well.

For now though, you have to try this Milk Tart. You have to add this to your list of go-to pie recipes. Your guests and family will love it. You will love it!

For the Milk filling

Prepare and Bake the Tart Crust

To store MIlk Tart, cover with foil and refrigerate for up to 4 days.